トップ > English > Interview with a French Female Hikikomori; Tellurienne, Round 1 "Not My Choice To Be a Hikikomori"

Everything is too late?

Tellurienne: I did not choose to become a hikikomorie. I did not become the one by my will. I did not want to be the one.

I am a 38 year-old woman, and it may be a little late to have a new home, a family, a job, resume my studies ... but I have many ideas with my imagination.

Vosot:  It will not be too late at all.

I am 55 years old, and for me, the age of 38 sounds to be very young. You can be assured. I know that some of the women of hikikomorie in Japan have started a new family or a new job after their 40s.

How long have you been a hikikomorie?

Tellurienne: Long time. I do not remember exactly, but it started in the early 2000s. And I started to shut myself completely in 2003 when I stopped my study.

Vosot: What time do you usually sleep and wake up?  Or, you have no rhythm?

Tellurienne: I go to bed around two o'clock in the morning.  I have sleeping problems, so I take sleeping pills. I wake up around noon, and start my day quite late. When I was younger, I did not have any rhythm in a day at all. I was awake all night and slept during the day. But it's much better now.

Vosot: Me too. Now, I can not turn over day and night like I did easily in my youth. Physically it's impossible. I live in the suburbs of Tokyo, and you?

Tellurienne: I live in France, in the Bourgogne (Burgundy) region, in a town of 2500 inhabitants in Cosne sur Loire. But I grew up in the suburbs of Paris. At Aubervilliers in the 93 Department.  I was born and studied in Paris. 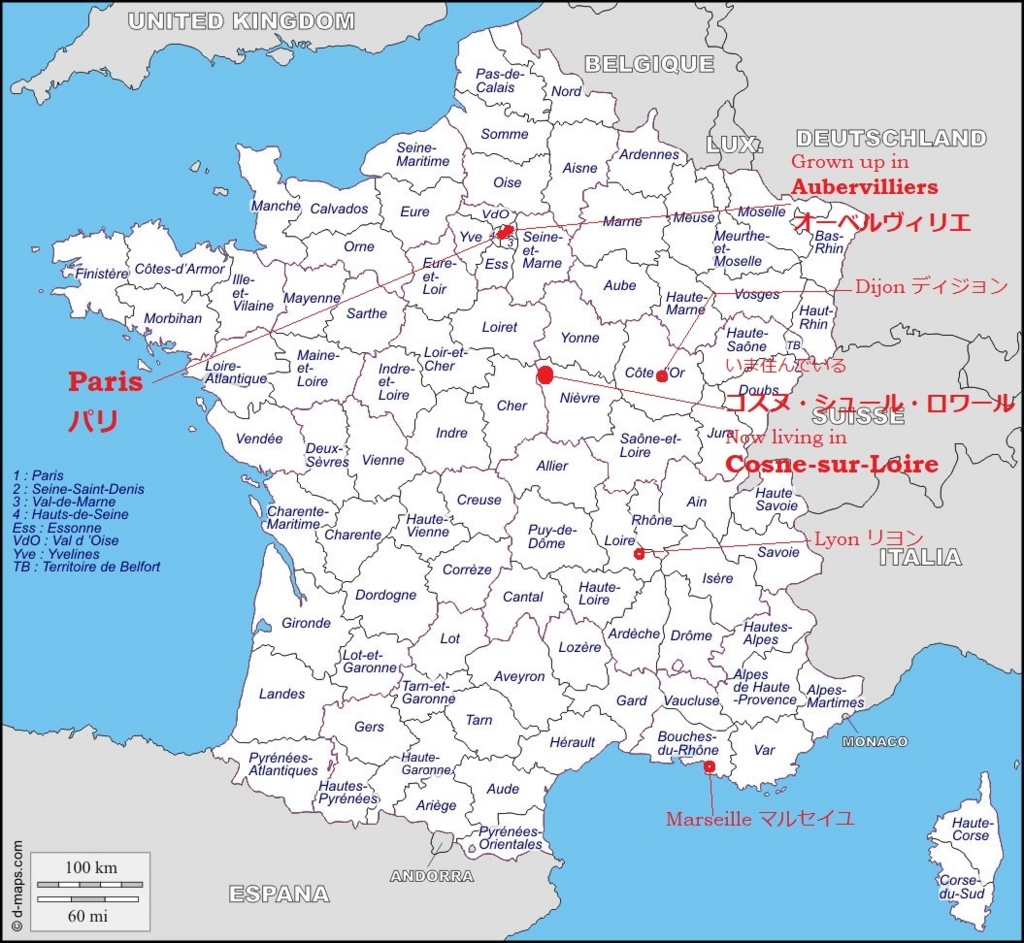 How Do You Manage Daily Shopping?

Vosot: How are you managing daily shopping?  In my case, living in the suburbs of Tokyo, there are many shops open at night.  I go shopping for food and commodity, about every three days, at night.

In addition, there are some supermarkets that I can order by the internet and deliver to my room. Indeed, since I don't really like people coming to my room, I don't use it much.

Tellurienne: In France, there is no store open at night. In my neighborhood, there are several supermarkets but they do not deliver. To go shopping, I have to go out during the day.

Every three weeks, I am accompanied by one or two people from SAMSAH. They help me choose food, organize my purchases and carry groceries to my apartment. Recently, they proposed me to ask for a housekeeper but I refused, because I do not want to be in contact with someone whom I don't know well and who is not part of the institute of care. The two people at the institute, SAMSAH, are respectable nurses and educators.

Vosot: Another hidden problem for hikikomori is exercise. If we recluse ourselves every day, we would certainly become physically weaker and overweight. So, I usually push myself hard to go out at night to do some exercise, from time to time, reluctantly.

Tellurienne: I have lost my walking habit. I often have health problems related to my sedentary lifestyle. I am lacking exercise, but I am not overweight because I do not eat much, but I often have back pain. Even at night, I do not go out.  I don't exercise even inside my apartment.

Vosot: I often have back pain too. It can be caused to sit in front of the computer all day.

Tellurienne: I sit in front of my computer from morning until night.

Vosot: I hear that in Italy, some of the parents of hikikomori say "The reason my child does not come out of his/her room is because of the computer", and they try to unplug the computer, or confiscate it.

Did your parents do the same things to you?

Tellurienne: My parents criticized me for having no job or for not trying to find one, but they never tried to unplug or confiscate my computer.  It was my parents who gave me the computer.  But it was before I became a hikikomori.  They might have regretted to have given it later, but never got violent by it, because I was already an adult by then.

Tellurienne: The only exception is when I have a physical activity, the equitherapy, which I do every 15 days.  It is a therapy with using horses, complementary to medical care.  I do it with a nurse of Medical-Psychological Center. It's a very physical therapy, whether I ride or not on the horse, but I like it a lot. I like to gallop or steer the horse on the ground.  But I always get tired quickly because I am not used to do the physical moves.

Vosot: As you may know, in Japan we usually take a bath to wash ourselves, usually at the end of a day. Here, a problem for us, the hikikomoris, are that, if you are severe in hikikomori, you can not even take a bath for days and days. If one does not take a bath for so many days, one becomes smelly and it gets harder to go out even for a small shoppings.  In this way, one becomes more hikikomoried.

Vosot: This is a serious but hidden problem among Japanese hikikomoris, especially among female hikikomories. I imagine that the equivalent of "bath" will be "shower" in Europe.  Do you sometimes have the problem that you are so depressed that you can not take a shower for several days and it makes you more and more hikikomoried?

Tellurienne: Yes, when I lived in my parents' house, I could stay easily several days without washing myself.  I had to wait until the house became empty.  When my parents were gone, I sneaked up to the bathroom to take a shower or a bath.  Since I started to live alone, I have no problem like this anymore. I wash myself almost every day and get dressed neatly even when I do not go out.   Previously, I was in pajamas all day.  I made progress by getting my independence. When I have to go out to the medical center, I am always very clean and well dressed.

Vosot: It's good you made progress. I think "taking a bath" may be a higher hurdle than "taking a shower" for a hikikomori, because when we want to take a bath, we have to make a bath at home or to go to a public bath.

In winter, it takes me 40 minutes to make a bath. If you intend to go to a public bath, you have to get dressed somewhat at least to go out. Recently, public baths are decreasing, so you have to walk a long way to find one. When you're in depression, the both are too difficult to do.

Tellutienne: That would be difficult… 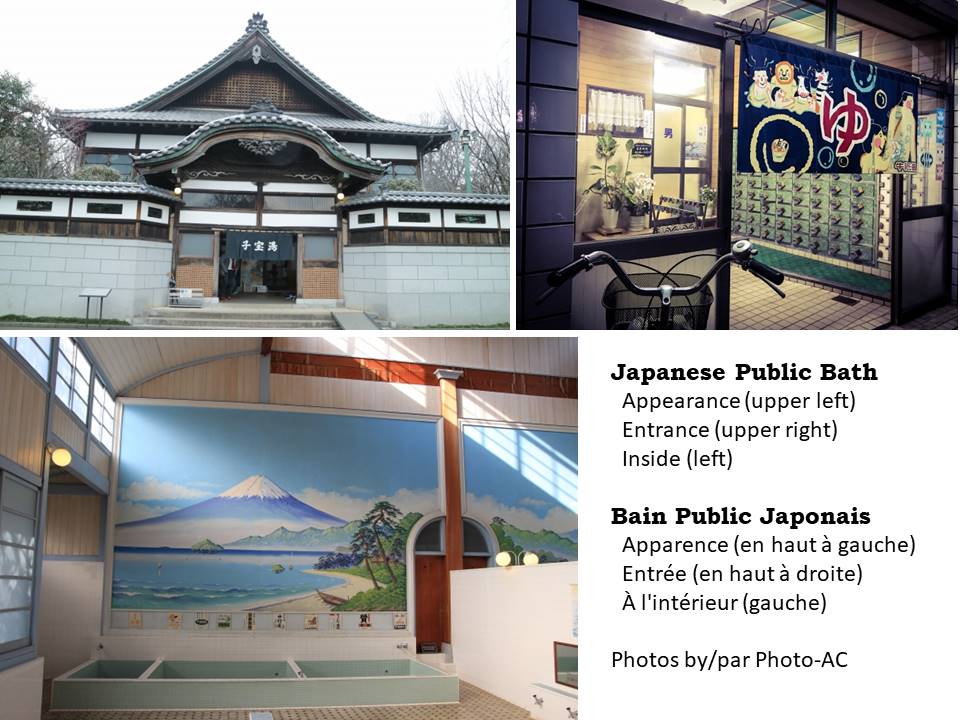 Vosot: But in France, you can take a shower right away inside your house.

When my depression was severe, there was a period when I took a bath only once a week. Since I was meeting nobody else, it did not matter to be smelly, as much as it did not bother myself.  If you are in depression, you don't care even if you're smelly. "Being alive" is the best you can do.

It helped me that it was winter, because we don't sweat a lot.

Tellurienne: I hear the summer in Japan is very humid.  You sweat a lot, don't you?

Vosot: Oh yes.  But I know a Japanese female hikikomorie who does not take a bath as long as three months in summer. It seems she has a secret method for not being smelly by using a certain scent and washing only her clothes. I don't know its details. In fact, I have met her in summer a few years ago, but she was not smelly at all.

Tellurienne: She must know a kind of magic.

I thought public baths were disappearing in Japan.  I am surprised to know there are still some.  I may have had wrong information.

In France, it doesn't take much time to take a bath.  We just run the water until the bathtub is filled. But here, we don't do it every day because the water is expensive and also for ecological reasons.

Vosot: Yes, the Japanese public baths have been decreasing year by year. Ten years ago, there were four public baths in my local area, but now there is only one. The apartments that are newly built attach a small bathroom inside.

Tellurienne: I hear that people in Japan don't use deodorant. Is that true?  It seems that some people are smelly because of that. Personally, I always wash myself before going out and I always put deodorant and perfume.

Vosot: It is true that the Japanese use much less deodorants.  First of all, we Japanese don't have so much smell as you the Westerners, good or bad.   Sometimes the natural smell of body is one of the human attractions.  It is probably an ethnical character that Japanese has less body odor. Japanese culture is based on it, and the delicacy of scent has been an important factor for our culture, for example, sushi, sake, sado (tea ceremony), kodo (incense ceremony) etc, they will be spoiled if someone puts on perfume to join.  So, sometimes we are disgusted with the person who comes along with perfume on. That's why it's best to take a bath often and stay without odor. It is more difficult for a hikikomori who has not bathed for a long time to enter such social or cultural scenes.

Vosot: Speaking of social scene, do you know many other hikikomoris comrades around you in your real life, or your life on the internet?

Tellurienne: I had an old acquaintance from my high school days who contacted me a few years ago. At that time I had a blog called "Hikikomori", so he got to know I was a hikikomorie. He was a tojisha of "social recluse".  We contacted each other for a while.  He called me on the phone. Unfortunately, it was too difficult for me to continue the relationship over the phone. Sometimes I did not answer him, so our relationship naturally disappeared. Now, you are the first hikikomori with whom I make contact on the internet.

Vosot: Oh, that is a great honor for me.

To the Japanese Version of this article

To the French Version of this article