トップ > ぼそっと池井多 > "Living in a Different Culture Gives Me Many Eyes"; Interview with First Italian Psychiatrist in Japan, Fran Pantò Round 2

To Become a Psychiatrist in Japan

Vosot    You are going to be the first Italian psychiatrist in Japan. When did you think you want to be such a person?

Fran I was thinking about it for a long time vaguely, but it was my third year in university when I concretely started to think, “I want to be a psychiatrist in Japan”

While I was living in Sicily until I turned to be 18 years old, I already had a wish to live in Japan in the future. While I was isolated from my surroundings, the Japanese anime culture was my salvation. Anime stories gave me the strength to live on.

Even when I had many things in my actual daily life that made me depressed, when  I was watching Japanese anime works, I felt supported and thought that I could live on. So I wanted to live in the place surrounded by this kind of sense and culture.

Moving to Rome, I could live much easier, but still I was feeling something was missing.

I can feel to be happy only when I set a big goal and I chase badly after that goal.. So I set the big goal  to become a psychiatrist in Japan.

I think everybody has a thing that only he or she can do.  I always felt that I would be happy when I eventually realize something that only I can do.  In that case I will be happy even if I can not have a wealthy life, - even if there are risks to fail, as long as the failure is linked to something that only I can do. Whenever I am in such a situation, I never feel to get tired and I get more and more motivated. I think everybody should pursue one’s own uniqueness in this way.

On the contrary, no matter how much money you can get from it, it won’t make me happy, if I can’t live that way .

My life may be economically more stable if I become a psychiatrist in Italy, but that is not the point. The reason I chose this path is that I wanted to be fully immersed in the culture that gave me the power to live on and saved me when I was a child.

In those days, I knew nothing about Japan. I thought, at first I had to overcome the barrier of language, so I started to study Japanese. I studied medicine and Japanese language so hard until late every night. I was feeling I was on the way to the big goal I had set for myself, so I never felt tired.

Vosot    Did you notice that if you realize the plan, you would consequently become the first Italian psychiatrist practicing in Japan and your name could be noted in the Japanese history in that sense?

Fran I thought there might be such a consequence, but it was not really important to me to be the first Italian psychiatrist in Japan. What was important was to acquire the happy environment to live in, or to put myself in the circumstance where I can get the motivation to make my efforts to live on.

In the meantime, I started to realize there would be another meaning in my plan. If I become a psychiatrist in Japan, I will be able to touch the realm of Japanese mentality which I have not understood yet. On the other hand, I started to think that the environment which I was brought up in was a different culture from a Japanese perspective, so I thought maybe I would be able to see some part of Japan that other Japanese people cannot see, and I can help them with this different perspective.

Psychiatry targets human mind, which exists inherently inside us. But human mind varies depending on the environment and circumstance which the human lives in. I am so interested in the relation between human mind and culture. I am interested in the concept that a mental disease occurs from the characteristics of the culture in which a person lives. That is why I am studying hikikomori.

Hikikomori or Social Hikikomori, That is a Problem

Vosot  Were you able to carry clinical research while you were in Universita Cattolica del Sacro Cuore in Rome?

Fran While you are studying in the faculty of medicine for six years, you have to learn medicine in general and it is hard to make time to study the area that you want to specialize. You have to be eager of knowledge to make it.

When I was in the 4th and 5th grades in the university, I studied under the supervision of Professor Federico Tonioni, who has specialized in internet addiction. Thanks to him, I had a chance to talk with some hikikomoris in Italy.

When I was interacting with socially impaired people in Italy,  I always wondered  “Is this person a hikikomori in the Japanese sense ?”. And I came to consider deeply what a hikikomori truly was. Thus the theme of my graduation thesis become “The Relationships among Hikikomori, Depression, and Anxiety”.

At the same time, there are a lot of tojisha(*1) of hikikomori who are presumed to have some mental disease but tend not to see a psychiatrist. In that case, the possible diagnosis would be depression, developmental disorders, narcissistic personality disorders and so on. However, in Japan the hurdle of visiting a mental clinic is still high, so those guys would never go to a mental clinic, then they could be considered  just social hikikomori, not hikikomori.

Vosot In this way, the categorization of "hikikomori" or "social hikikomori" does not have any substance for me, and I think that the requirement about mental disease related to the hikikomori condition is not functioning .

Fran That is a complicated area. Even when a mental disease is the primary  reason that leads a person to the hikikomori condition, the other way around is still possible. In other words, there may be a case like a person is struggling with some symptoms of mental disease and by the consequence of the struggle, the person starts to be in the condition of social hikikomori, as the reaction to their problems.

Human beings are supposed to be social in nature. We have necessity to maintain our fulfilled social human relationships. That is why I think is very natural that if you are lacking of human contacts during the prolonged period of social hikikomori, you may be easily led to have psychiatric symptoms. 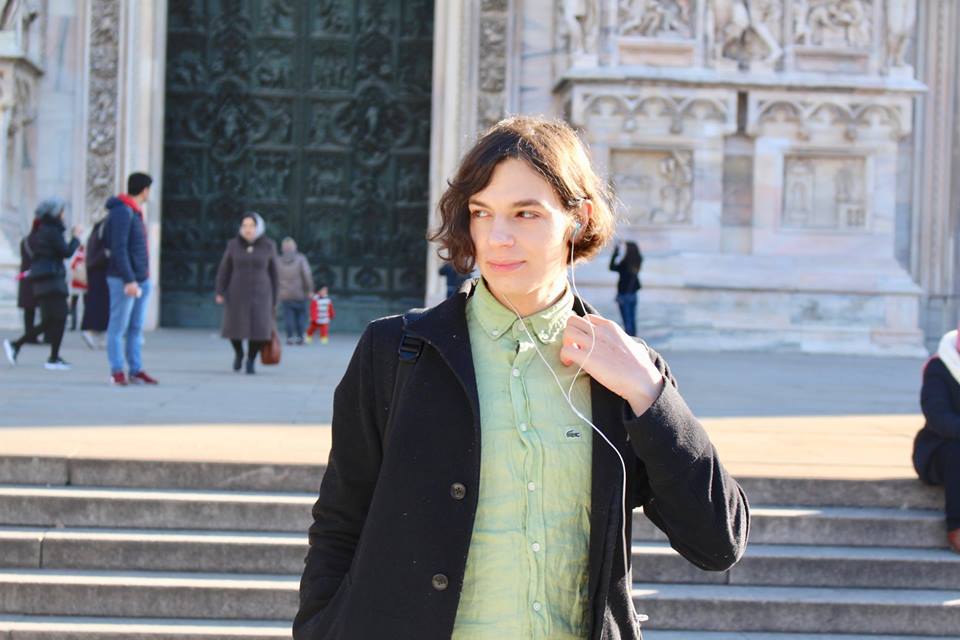 Vosot Did you come to Japan shortly after you graduated from your university in Rome?

In the same month, I also took the scholarship exam for young Italian researchers, held by the Japanese Embassy in Italy, called MEXT scholarship. It gave me the qualification to enter a doctoral course in Japan. In April 2015, I came to Japan, and became a student in University of Tsukuba.

Vosot  Was it the first time for you coming to Japan?  Had you never been to Japan before for sightseeing or something?

Fran No. In my case, I had never been here before. So everybody was preoccupied for me in Italy. They told me,

“Aren’t you just idealizing Japan? When you actually step your foot in Japan, it may be a shock for you to realize that is not the place you thought, and it may never fit you at all. You may come back home to Italy and be totally miserable.

However, it was found out later that I was not idealizing Japan at all. I have simply accepted the goods and the bads of this country.  In fact, there has been nothing I got disappointed at Japan ever since I came to this country.

Vosot As a Japanese, I don’t know what to say after I hear your words, but I am just thankful. What was the reason you chose the University of Tsukuba to become a psychiatrist in Japan?

Fran When I was studying in Rome, the name of Dr. Tamaki Saito was written in the textbook, and I immediately got attracted by his research, but at first I thought, “This person seems to be a very  famous psychiatrist, must be a legend. He must be dead by now!”. But later I found out that he was not only still alive but also vigorously academically active, teaching at the University of Tsukuba. So I sent an email to apply in the post-graduate course of the social psychiatry which he was directing, and I was accepted.

Vosot   Are there any other students from foreign countries in the class of Dr. Tamaki Saito?

Fran Yes. Many Chinese, and last year, an Argentina clinical psychologist joined us.

Vosot   I have interviewed a Hikikomori in Argentina through the internet.  Knowing the fact that a clinical psychologist has come to Japan from Argentina to study about Hikikomori, I guess they have recognized there are a lot of hikikomoris in Argentina as well.

Fran I am not sure, but maybe.

Vosot Knowing that many students from China, can I take it that China has many Hikikomori too?

Fran Yes. I hear many problems have occured in China as well such as hikikomori, futoko, or bullying.  The Chinese students are also making researches about cultural differences in these behaviors .

Vosot Ah, now I see one thing.  One day last year, I was on a TV program with Dr. Tamaki Saito.  In the program, he said something like we can find many hikikomori in Catholic and Confucian cultures. So I said, “There are many in Muslim countries too”(*2). Now I guess he said like that because he had students researching about hikikomori from Catholic and Confucian countries .

Fran The hikikomori phenomenon has inherent aspects which go beyond any border of cultures and nations. In that case, we should rather talk about social hikikomori in a broader sense, from my point of view.  On the other hand, there are some elements that can be regarded as originating only from Japanese culture.

Vosot That’s right.  I am not a scholar nor a therapist, but I am just a tojisha of hikikomori.  I have been interviewing many hikikomoris in many countries through the GHO, because I have got the very same kind of interests. I hope I can have a chance to talk with your colleagues who came to Japan to make researches about hikikomori.

...To the Italian Version of this article