トップ > ぼそっと池井多 > The Odyssey of a Hikikomori, Round 2 : "The Japanese Hikikomori in 1980's" - Not Allowed to Live on with Doing Nothing? 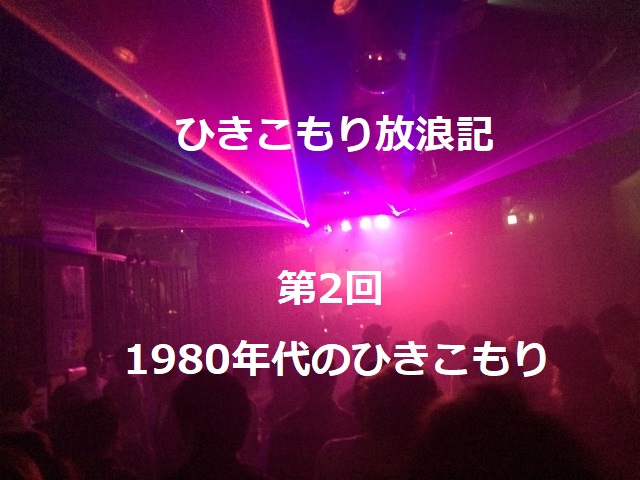 Unable to Get Up

In the last Round 1, I wrote about my strange behavior that I had jumped into a cafe aside just before the final interview of a well-known trading company in Japan.  I lost a precious opportunity to get a job.  I can hardly say that I chose it for my consideration. I would rather want to say, "My body also reacted like that".

However, those who believe in the power of will would say back immediately,

"Don't be silly. You can't tell a lie. That behavior is just the result of your will.  You were willing to be lazy."

"If you are ready to die, nothing is impossible. You can do anything."

Actually I used to be one of those who was thinking like that way.  That is why I was pushed away by myself to the dead-end of the life all the more. I could not have any way to interpret and explain myself becoming unable to move against my own will.

I scolded myself, and continued to visit companies as if whipping myself.  I had no more chance for the trading company but fortunately another traveling company kindly offered me a job. It was a high-ranked company on the list of the popularity among students, and the working condition was fairly good. Some colleagues even envied me.

However, when I was decided to work there, I felt like being sentenced to be in prison for life.

That was the feeling penetrating from the outside through all my skin into the whole body.

The more I wished to get up, the more tightly my body got stiffened in bed like a frozen fish.

"What's happening on me?"

I could barely get up in the late afternoon, but everything in the world looked just grey and barren in my eyes.

It didn't look like I had got a fever.  There was nothing wrong with my body.  Anyway I got a trouble.  I would be just called to be a lazy boy if I could not get up with the healthy condition of my body.

The more I was urged to manage it somehow, the less I became able to do anything.  I stayed in bed all the day.

I continued to stay in bed also in the following days.  I felt too troublesome even to go to the toilet.  With this condition, it looked almost impossible to commit myself to the heavy labor like meeting someone.  So I reclused myself in the room. I omit everything that I could survive without, like bathing. It made me more impossible to meet anybody.

I could not help recognizing that I would not be able to have a social life. I decided to get out of my room to visit the office, in order to decline the contract.

In those days, there was an urban legend spreading among us, the university students in Tokyo. It said, the students who came to the office to refuse the unofficial contract of employment would end up with meeting the bathing of boiling hot udon noodle from the head, thrown by the officer of the personnel department of the company.
I thought the hot boiling udon noodle would be unlikely, but it would be sure that the officer of the personnel department got furious to hear me canceling the unofficial contract.

However, the officer who came out to deal with the matter listened to me until the end, with an expressionless face nodding from time to time. He did not pick up the phone to order the hot boiling udon noodle to be brought over, nor try to interrogate me further.

"I can not graduate from my university because I failed at a credit required."
I told a lie.

Until today I cannot forget the face of the personnel section manager at that moment. Since he would never be reading the sentences like this article, let me apologize for you here, Mr. Goto. I am so sorry I told a lie to you. Perhaps you were aware of it. You might have felt something was strange on me. Thank you for missing me out. It might be thanks to you, that I could live my own life later...

Busier than a Working Person

In fact, I had got all the credits required for my graduation, so I did not submit my graduation thesis on the purpose to stay over in the university.
I was told by the school affairs section, "You can stay over here only two more years, based on our regulations."

It was sounded like a declaration of the length of the rest of my life.

"As long as I have got the student ID card, I am something in this society.  I can reply, 'Yes, I am a student'. But after I am thrown out of the campus, what am I?  How can I reply to state what I am?"

I felt like a man could not live on in the society without any social status. "If I am nothing in the society, I may not be living."

In my mind, there was a world map drawn by the medieval people.

They did not know that the earth is round, so they believed the sea finishes around the New World they would call later, and the sea water was falling down to the bottom of the abyss, where the world ends. It was also a commandment to the ships which conceived the ambition to row out to the unknown ocean.

For me, it was two years later, when I would have to get out of the university. That must be the end of the world where the sea water was falling down to the hell.

Needless to say, my parents did not know my sense of crisis at all. They were upset to hear that I would not graduate and stay over in the university. So they no longer sent me financial support. I was ready to accept it. I decided to earn my own living expenses and tuition for the university.

A student who goes to a national university with the money he or she earns by oneself is supposed to be qualified to be exempt from the tuition as "working student". However, in order to prove that I was the one, I had to submit the official document in which my parents declared they no longer support me financially. But my parents felt a shame to declare it because they wanted to pretend like they were doing everything the parents normally should. Thus, I could not get their signatures on the document and consequently could not get exempt from the tuition. I had to pay all the fees to the national purse only for keeping the social status "Student", without attending any lectures.

After all, my parents probably wanted to get a diploma for themselves to show that they graduated from parenting, as soon as possible. However, I was not approving their graduation. Or, I did not approve that they had been even parenting. That is why I was preventing them from getting their diploma by the fact that I did not receive my own diploma from the university.

However, such interpretation became possible only after many years had passed.

No Word to Approve the Existence

Thus, while I was staying over in the university for two years, I was so busy to work, mainly as a cram school tutor to high school students or a night guard, in order to earn my own income for living and tuition.
I had no time to hang around just like many other university students.

People likely think that all the hikikomoris are lazy guys. But I stated at the beginning, "Hikikomori is various." Whenever I came across the prejudice that a hikikomori is lazy, I felt so frustrated. That might be because of the hardship in those years.

After all, I was fully busy all day every day - even busier than an average office worker.  But still, I believed that if I became an office worker, there would be no time for my own life.   Also, I never imagined that I would still have any possibility to become an office worker, once after I had declined one opportunity.

Simply, I was so naive and did not know how the society is working around.  The father who would teach me a life did not exist, though my father was alive.

The world where I was living in was small.  It was only the next year when the new Japanese-made English word "freeter" (a person who survives with freely changing one's part-time jobs).  Around me, there was no precedent model, for example, who graduated from the university, was getting income by part-time jobs, and continued to do what they want, like music, drama, entertainer...whatever. All my colleagues entered the company to work in without any questioning.

So I did not know how to explain to the others what I was doing.  I had no word to explain what I am.   And I did not have the boldness either, to continue to be in the society without any title or social status.

I wanted any word to identify myself, or to explain what I am, even if it is something temporary.

But on the other hand, I would like to testify that when the word "hikikomori" had not existed in society in 1980's, I was suffering from the lack of such words.  I had no word to explain myself, or to appeal my problem to the others and to make it socialized.

In those days in Japan, still the bronze statue of Kinjiro Ninomiya was standing in the yard of every elementary school. He is a famous hard-working farmer in the 19th century for reading books while carrying firewood at back, despite being poor. He was a symbol of effort and diligence. All the elementary school pupils were educated and encouraged to become like him.

But what does the episode tell us truly? If you are reading your favorite book, you would want to continue reading it even while carrying the firewood. It is the same psychology as the one online gamer would have. It was not the outcome that he was patient enough not to do something he wanted to do, but the one that he was impatient to keep doing anything he wanted. Shouldn't he rather stand in the elementary schoolyard as a symbol of freedom and desire?

And the Japanese age had already been climbing up the slope of the Bubble Boom, which would meet its peak in 1990.

...To the Mandarin Version of this article