トップ > ぼそっと池井多 > The Odyssey of a Hikikomori, Round 3 : "In the Bubble Economy" - Chased and Pressed by Economic Boom 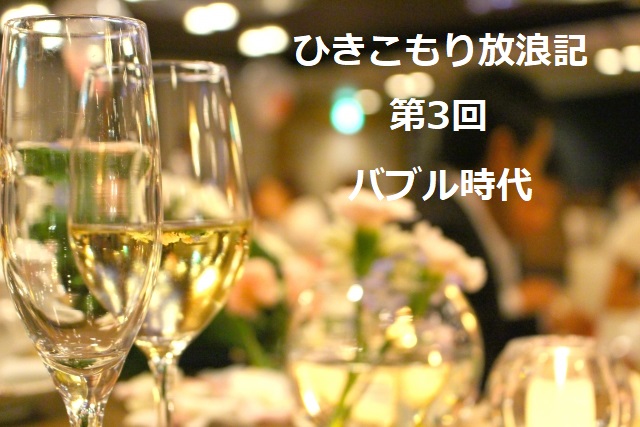 Hikikomori is Not a Negative Legacy of the Bubble

Last time, I used the subtitle "Hikikomori in the 1980s" for Round 2, because around 2000, when the words "hikikomori" and "NEET" were prevalent in society based on the negative perceptions, there were economic critics commenting this way ;

"Since the Bubble Economy burst and the Ice Age of Employment came along, many young people failed at job hunting and turned to withdrawal, and that is how Japan started to hold a social problem of hikikomori for the first time."

In those days I had no idea of "hikikomori". Moreover, I did not know I was one of them. So I didn't pay any attention to that discourse. Consequently, I cannot recall even the name of the critics who were saying such nonsense.

Now, I deny the theory that these economists said with full confidence. I am walking proof of the fact that hikikomori existed even before the Bubble Boom. I needed a certain length of time in order to notice this fact.

Today it seems to be an established theory that hikikomoris existed in Japan since the late 1970s. I am not sure about this. Because we can easily imagine that the people whose lifestyle was hikikomori must have lived a long time ago. But back then, we did not have the term “hikikomori” yet.  In any case, I must insist that it was not the economic recession that produced the population called hikikomori.

Who Benefits from Economic Booms?

In 1985, when I started to be a hikikomori at 23 years old, Japan was about to begin to climb up the stairs for the Bubble Boom. But I have no recollection of benefiting from that period.

My colleagues at university talked proudly about their stories: “When I visited the company where my senior at university worked, he spent his company expenses generously to let me eat a steak at a restaurant.” And he attributed it the benefits of the Bubble. Indeed, in those days beef was expensive in Japan and I seldom ate it. However, even if I had received a more expensive solicitation by a university senior at the time of my company visits, my ultimate resolution to decline the unofficial contract would not have changed. In fact, I would have felt a sense of guilt and incompetence on account of their courtship, because it would result only that I find myself not meeting their expectations.

Either way, the economic boom annoyed me, since I was in the process of beginning my life as a recluse.

In Japan, if you graduated from university and started working at a company from 1988 to 1992 -- 1987 to 1991 by our school year -- you belong to "The Bubble Generation". A school year started in April and finished in March. I hear the school year system has been changed for university and college these days to adapt to the foreign school year, which starts in September.

If you were going to graduate in March 1988, you must have been active in job hunting and company visits in the summer of 1987 and entered the workforce in April 1988.

I pushed myself hard to find a job in the summer of 1985, as I wrote in the second round of “The Odyssey of a Hikikomori”. Eventually, I became unable to move physically, so I told a lie to the personnel section of the company where I got the job, saying “I failed to get a compulsory credit, so I cannot graduate this year.” Then I stayed in university for two more years. I graduated in 1988, though I did not start working.

Therefore, I am technically part of the Bubble Generation.

The Bubble Generation has a bad reputation. We did not have difficulty in finding employment, so we supposedly don’t understand the hardships of the following generation, which is called the Ice Age Generation. We are reputed to be dependent on others, and we are the burdens of our companies. We are called “crusher bosses” by subordinates in the working world, and “monster parents” in schools where our kids attend. We are regarded as “grasshoppers” in the tale of “The Ant and the Grasshopper” and are thought to have been dancing every night on a stage called “Otachi-dai” while waving big colorful fans in the gorgeous discotheques that were popular in the Bubble Period.

However, if I could speak to the people who created these myths, I would say, "What guys are you talking about?" That is my honest feeling.

Did I enjoy Japan’s period of economic prosperity? Not at all. I was just pressurized by the economic activity surrounding me.

The showcase of shops downtown were full of new products which I found totally unnecessary. People went to buy them just because they wanted to look like updated persons who stay current with the era. Soon afterward, they had a new problem. Increasingly boxed in by the bulk of things they never used, their living spaces shrank to the point where they began to suffocate.

They made long queues in front of luxury department stores starting from early in the morning. They kept working with deadly commitment just to keep their wallets filled with money so they could come to these kind of places. The situation was summarily expressed, “I am working.”

"Why do I have to join the ridiculous circle?", I thought.

What would happen, once I stepped into their circle?

I would become a slave to corporate whims, incited by the famous commercial song of an energy drink: “Can you go on fighting for 24 hours?” I would be shoved into crowded rush-hour trains for 4 hours every day as I commuted to and from work, and I would spend all my energy working, an activity akin to chewing sand. Before long I would be pressured by my social surroundings --“Now it's the time for you to establish yourself”-- and I would force myself to get married. Then I would be pressed by other urgencies: “Is it OK for you that Japan’s birth rate is declining?” and the subsequent demand to take some actions to make a baby. Thereafter I would be sent around in unfamiliar local cities or sent overseas while raising children, all of which would be against my desires.

Before I knew it, I would climb toward retirement, where I would find myself a poor and bedridden old man.

Is this the life I want? Have I finished such a painful first half of my life for the sake of setting out on such a second half?

I have suffered enough. I was forced by my mother to be awake until 2 o'clock in the morning since I was 9 years old. She demanded that I study for the entrance exam in the famous middle high school where she wanted me to enroll. I was constantly haunted by her words; “Listen, my son. If you get lazy, I will kill myself”.

If she had said “I will kill YOU if you don't study as much as I want you to”, then I would have had options. I could have protected myself or simply escaped. But what could I do as long as she said: “I will kill myself”?

She posed herself as the hostage. It was she who was the victim. I had no way to resist her and could not help but do whatever she told me like a slave, which brought tremendous hardship and agony, feelings accumulating within me to this day.

What was my reward, that would balance out all the hardships I would endure?

What was the goal for me, after running through all the torturous marathons?

To become the manager of a big company? To buy a big house? To ride an expensive foreign car? To marry a beautiful woman? To drink in the high-class entertainment district every night?

None of that attracted me. At least, none of it appeared as an appropriate reward, or what I felt I had earned.

However luxurious this life seemed in the eyes of normal society, as long as I didn't find a shred of value in it, it could not be my reward. So I had no idea what I struggled for, and what I lived for.

I repeated my gloomy questions.

The Voice of Blame: "You are lazy"

But those thoughts never came out of my mouth. It was probably because they were hard to articulate. I knew that if I uttered such a thing, it would pose a big problem. I would immediately shoulder the blame myself.

“What are you expecting?”

“You do not know the nobility of labor”

“Everyone has a painful life”

“He who does not work, neither shall he eat.”

It was easy to predict that I would end up reiterating the same classical preaching which I had already heard hundreds of times. But I had never thought, “Working is crappy.”

For example, whenever I saw a cleaning staff at the station's toilet, I could not help but think deeply, “No matter how simple the work looks, if there is no one willing to work like this, society will not go on.”

Compared with them, what am I? What do I do? I am just lazy. I am just a good-for-nothing... These voices came up from somewhere deep inside me. However, getting into such an occupation did not seem to me like any kind of solution. If I considered it, it looked to me like just a waste of time. I did not know how to explain this contradiction. But looking around at my friends, none of them appeared to have such troubles. Everybody looked to me like they were enjoying the economic boom. In this way I isolated myself in Japan while the Bubble was booming. And it led me to withdraw from the Japanese society more and more.

...Continued to Round 4
…To the Japanese Version of this article

...To the Mandarin Version of this article